The most popular dog breed list in Australia, America, Canada 2012 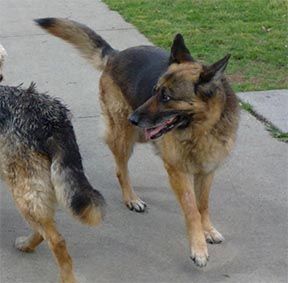 The list is also compared to the 2011 most popular dog lists so that you can see changes in people’s preferences for dog breeds, and differences in country’s dog trends.

In this report, the popularity of dog breeds in Australia is also be compared with those in America and Canada. These counties are chosen, as except for England and Ireland, they are the leading dog ownership countries per capita in the world, and they also have some of the highest online searches per person in the world for dog associated topics.

The mechanics of the ranking are that the breeds are listed with the highest search volume on Google listed at the top, and subsequent breeds are listed as a proportion of the leading dog volume search numbers per month. For 2012 a six month average of Google search volumes was taken to provide a more accurate reference, these were for the months April to September 2012.

The most popular dog breed search in Australia is still the German Shepherd. Google shows it to have approximately 8,100 exact searches per month via its search engine and search partners. The top five most popular dog breeds in Australia are taken up with three large dogs (german shepherd 100%, labrador 82%, golden retriever 82%) and two small dogs (Pomeranian 90% and French bulldog 82%).

The fifth top breed has still the exact same proportion of search terms (82%) of the top breed dog as it did in 2011 showing that all these breeds are fairly even in popularity. The fifteen most popular dog breed is still 23% of the highest breed term, showing fairly good depth in dog breed popularity across the dog breeds.

Every dog breed in the Australian top ten of 2012 are discrete breeds and adult version, not the puppy versions.  The Pomeranian and French bulldog both moved up one spot on the dog breed popularity list while the Labrador dropped a place and 18% in popularity compared to the leading breed in 2012.

This means that the following breeds did not make the top fifteen in Australia in 2012: beagle, bullmastiff, bernese mountain dog, poodle and boxer dogs.

Like the Australian most popular dog breed list, the German shepherd also topped the USA list for 2012. The total average monthly volumes searched on Google and its partners for April to September 2012 was 145,000 searches per month for the German Shepherd.

Another unusual characteristic of the American dog popularity list for 2012 is that there is little depth in the list while the top ranked German shepherd has 145,000 searches, the tenth placed breed has only 18% of the leading breed search volumes.

You will also note that ‘breeds’ seven to thirteen are PUPPY versions of the breeds. You may consider this technically as splitting the popularity of a particular breed,  however the top ranked puppy is also the German shepherd! And the eighth ranked breed is ‘boxer puppies’ 21% (while boxers themselves do not make it on the top fifteen list).

The 2011 American most popular dog breed list only has seven entries on it, as only those breeds that made it in the top fifty dog associated terms were counted. In 2011 by the time the list got to the seventh dog breed it was already down to 11% of the top breed dog search volumes – the German shepherd.

In contrast, in 2012 fifteen breeds and puppies made it within the top 50 searches and the fifteenth most popular breed was still 14% of the most popular dog search volumes.

So the two breeds common within the top five are german shepherd and Pomeranians. It is very interesting that the labrador is the third most popular dog in Australia but did not make the top fifteen in America.  Nor did the French bulldog.

The fourth most popular dog in America, the English bulldog did not make it on the Australian list. More curious than this is that the American Bulldog exists, but did not make the top fifteen in America!

The dog breeds that round out the top five most popular list in Canada in 2012 are: golden retriever 93%, German shepherd 87%, Rottweiler 79%, Pomeranian 77%

VERY similar to the excluded breeds on the American 2012 dog breed list, many of the same breeds that were present in the Canada 2011 dog list were excluded in their 2012 list.

For instance,  the bernese mountain dog was equal top breed in 2011 in Canada but did not make the top fifteen in 2012. Other breeds missing from the 2012 list are: beagle, French bulldog, bullmastiff, Labrador, Newfoundland dog, jack Russell terrier and boxer.

Australia had a few puppy varieties towards the tail of the top 15 while America had seven in the bottom half, and Canada had none.

It is likely that breeds that ranked very high in a country in 2012, that were not on a country’s previous list in 2011, may also be a trend dog that disappears from the next year’s list (2013). There are dogs like the shih tzu in all countries and the cavalier king charles spaniel in Australia, and the English bulldog in America.

If you are interested in this popular dog breed list analysis, you may also enjoy the analysis is the English and the Ireland popular dog breed analysis. Especially since these two countries have the highest ownership rate in the world and the highest Google search rate for dog related topics.