A new preservative for dog food Prot X – is It safe? 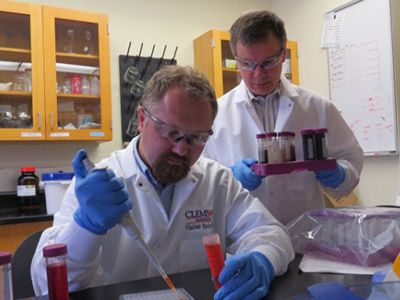 Its not often that a whole new preservative for dog food (or human food) is found or created but two guys recently won an award  this year for such a feat.

The main online discussion that seems to be cautioning this is how the preservative is made and how safe it will be.   Because as you will see the antioxidant is created from red blood cells found in animal blood.  If this product becomes mainstream people want assurances that any blood diseases or viruses will not be transmitted with the new preservative.

This will set the scene ” Alexey Vertegel and Vladimir Reukov, professors in the bioengineering department and researchers for Clemson’s Animal Co-Products Research and Education Center (ACREC), are winners of the 2016 Bisplinghoff Innovation Award by the Fats and Proteins Research Foundation for their creation of a natural antioxidant, Prot-X. Their creation is a clear liquid that will be used in the pet food, as well as the rendering industry.”

Curiously another quote in the article says ” innovative natural product they have created that can extend the shelf life of pet food.” – it begs the question of how something that two people created in a lab can be called natural product.  It might be based on a natural product – BLOOD, but the process to turn it into an anti-oxidant is not ‘natural’.

Other fun facts from the article are: “Rendered products are proteins and fats obtained from parts of the animals that aren’t used for human food,”  These proteins and fats are a good source of nutrition in pet food and feed for livestock, poultry and aquaculture.”

Which again begs the question of why this preservative is so good for the pet food industry but not human food ?   the other thing you might have missed in this article is that they are talking about rendered products (often what is known as glue from horses) and “parts of the animal that arent used for human food” means animal by products.  A lot of dog food review sites suggest that these parts are called animal by produces and are so grizzly, low nutrition or dangerous for dogs, that they should be banned from dog food, but many dog food companies still use animal by products as a cheap filler in dog food pellets and wet cans.

“Approximately 60 billion pounds of animal by-products are generated annually in the U.S. and Canada as a result of meat, milk and egg production. These are processed into 22 billion pounds of by-products for pet food and other animal feed ingredients as well as hundreds of other consumer and industrial applications, including biodiesel.  “

The new preservative made from animal blood is called Prot-X and is expected to be in dog food as early as 2017.

One hopes that before this new wonder preservative is rushed through, that it is also licensed to be used in human food (as the tests will be more rigorous) and a full independent study is made into the long term effects of its consumption by dogs.

Previous reading
Do you know what additives are in your dog treats?
Next reading
Kangaroo and fish dog treats, what colour do you expect?