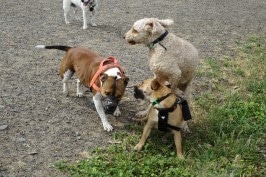 That’s a title you don’t read every day.

This is just another blip in the life of a dog that is walked twice a day forever. And why wouldn’t you? Or why do I? But how did that mark come about?

Did you know that dogs that are social are not born that way? They don’t come pre social into life, they lose being social if not walked regularly off lead, and that most people don’t even know that their dog is not social. The easiest way to test this in talking to a person is if they say that my dog doesn’t like a specific colour, breed or size of dog. Because that is not a social dog.

A photo of dogs playing is rarely as simple as it seems, unless of course we are talking about one of those staged, photo shopped ones that seem to be very popular these days.

For me I love a dog just going for walks, being social, and doing social things that dogs do. This photo is about the dog in Front, Louie, as much as anything else. He is the youngest of the three dogs and always likes stirring up the staffy called Apache. The staffy is only muzzled as a safety precaution as many staffies are prone to ‘over excitement’ and over play, leading to dog injuries, without the intent. But that is not what this photo is about.

The usual dynamic between the little brown pup and Apache (the staffy) is that the little brown pup revs the staffy up, gets her to chase him, then Louie can turn his attention to getting other dogs involved into the game. Of course not all dogs want to be involved in the game, and that is where the judgement of a social dog comes into it. Most social dogs learn to decline politely and get a little more forceful when the decline is not accepted. But they do not bite.

The spoodle in this picture is six years old and declined several requests for play, until they could not be ignored any more. Insistent Louie has been with our pack for a long time and enjoys things when they get a little out of hand, or in this case when he has coaxed Archie the spoodle onto play.

Archie happens to be the most social dog of the pack, but also dominant in nature (as are the other two dogs), so when his request for not playing were not accepted, he chose to let the little puppy know that he is physically superior to it. Standard dominance, but in a social way. Any dog purposefully getting any part of its body above another dog is a show of dominance, and this is very clearly demonstrated in what appears to be a ‘mark of the year’ contender by Archie.

After a little more play, Louie went back to just concentrating on making sure that Apache was still interested in trailing him all over the park. A win-win situation, and Archie went back to tracking scents as is his two water retriever dogs background.

Another successful day where all dogs got satisfied, within acceptable limits. Which reinforces their social behaviour more.

Previous reading
Archie spoodle dog digging out a rabbit hole (fast motion). VIDEO
Next reading
The art of the meeting